Arsenal have made a contract offer to Tanguy Kouassi this week, with the defender currently considering his options with a number of potential suitors lining up.

The 18 year-old has broken into the first-team fold for Paris Saint-Germain this season, picking up 13 first-team outings after making his debut on December 7 against Montpellier.

Despite enjoying a strong run in the first-team, his club have so far failed to agree a new contract with their impressive youngster, and are now at risk of losing him on a free transfer this month.

Kouassi will be a free agent come July 1, despite CalcioMercato stating that the Paris club believed to have offered him a new five-year deal worth £9 Million.

Le10 Sport however claims that Arsenal have also made an offer for the centre-back to join them this summer, although we are amongst a list of possible destinations including Bayern Munich, Borussia Dortmund, AC Milan and Monaco who are all believed to be vying for his signature.

Following last night’s dire performance by David Luiz, our side look further-more likely to let the Brazilian quit the club at the end of his contract this month, and we could be set to make a number of defensive changes over the summer.

Shkodran Mustafi, Rob Holding and Sokratis are also being linked with potential moves, while Willam Saliba and Pablo Mari are expected to challenge for a first-team spot for the new campaign.

Has Kouassi shown enough to warrant considering for a first-team role at Arsenal too? Could we pair him alongside Saliba in what would be the youngest CB pairing in the league next term? 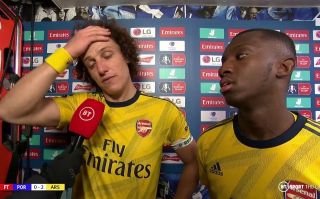 Paul Pogba and Bruno Fernandes: Could their partnership transform Manchester