FIFA and UEFA have both expressed their support for players who wish to protest against racism on the pitch.

The death of George Floyd in the United States has led to widescale protests and riots, and many players and their clubs have been keen to show they stand side-by-side with those taking a stand.

Liverpool, Chelsea and Newcastle were all among those teams to make a statement during training, with entire sides taking a knee – a form of protest made prevelant by NFL quarterback Colin Kaepernick. 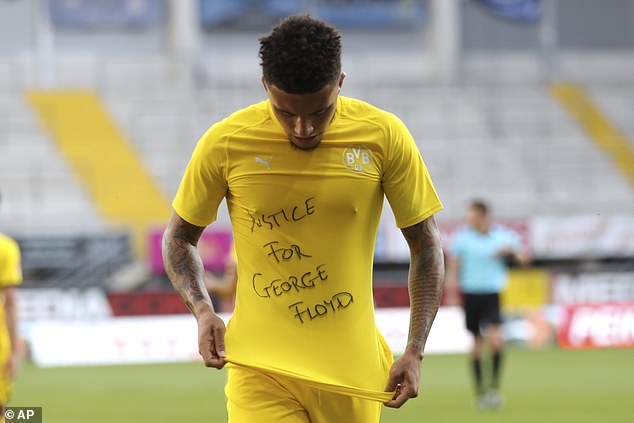 Other forms of protest have already been seen on the pitch in the Bundesliga, with England international Jadon Sancho revealing a T-shirt at the weekend under his Borussia Dortmund shirt which read ‘Justice for George Floyd’.

Mr Floyd, a black man, was killed by a white police officer, Derek Chauvin, while under arrest in Minneapolis last week.

Sancho, 20, was booked by referee Daniel Seibart for removing his shirt, but football’s governing bodies have now indicated that these forms of protests should not be punished by officials.

FIFA president Gianni Infantino said: ‘For the avoidance of doubt, in a FIFA competition the recent demonstrations of players in Bundesliga matches would deserve an applause and not a punishment.’

Borussia Monchengladbach star Marcus Thuram also protested by dropping to his knee after scoring in their win against Union Berlin. 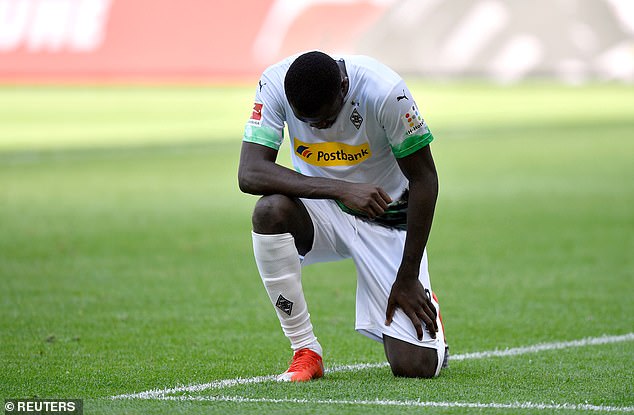 UEFA president Aleksander Ceferin said: ‘Football is a sport which encourages tolerance, inclusion and justice. These are the same values being espoused by those showing solidarity to George Floyd.

‘If a player in our competitions were to display a message or act symbolically to ask for equality for human beings the circumstances around the event should be taken into account in line with UEFA’s zero tolerance against racism.’

The statements come after the FA revealed it would look to its officials to use common sense towards any acts of protest when the Premier League and Championship return later this month.

The German governing body, the DFB, said after the weekend matches that they did support the fight against racism but…

Read More:FIFA and UEFA throw support behind Jadon Sancho and others who protest on the