‘Loving your country comes before the club you are in, that isn’t the problem’: Thibaut Courtois defends Real Madrid team-mate Gareth Bale after he posed with ‘Wales, golf, Madrid’ flag but admits decision was ‘miscalculated’

Thibaut Courtois has defended his Real Madrid team-mate Gareth Bale after he posed with a ‘Wales, golf, Madrid’ flag but has also admitted that the forward’s decision was ‘miscalculated’.

Bale posed with a flag with the words ‘Wales, golf, Madrid… in that order‘ on it after Wales secured Euro 2020 qualification last week.

His celebrations have led to controversy in Spain but his team-mate Courtois has spoken out about the incident.

‘I don’t think that Bale’s priorities are Wales, golf and Madrid. Bale is involved with Madrid at 100 per cent,’ he said in a pre-match press conference to Madrid’s Champions League clash against Paris Saint-Germain on Tuesday.

‘Loving your country still comes before the club you are in, that is not the problem.

‘The problem with Bale was that in Wales he miscalculated with the euphoria because he was happy.’

Madrid fans hit back at Bale by unveiling a banner in the stands, which read: ‘Rodrygo. Vinicius. Lucas. Bale. In THAT order’, and jeering the Welsh star in the club’s victory over Real Sociedad at the weekend. 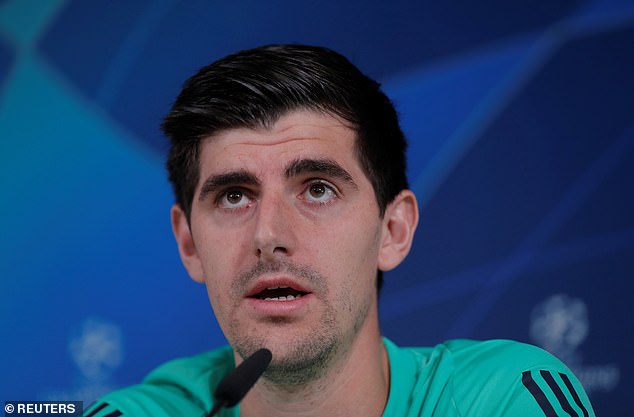