Alvaro Morata knows he has a fight on his hands to make the Spain squad for Euro 2020: ‘There won’t be space for everybody’

Alvaro Morata admits he has to fire this season for his club in order to make the Spain squad for the European Championship next summer.

The Atletico Madrid striker scored in the national team’s 7-0 pummeling of Malta on Friday night, and is set to feature in Spain’s final qualifier against Romania on Monday.

Morata, who returned to Spain from Chelsea in January, has scored seven times in 13 appearances for Atletico this season but knows his form will need to continue throughout the season in order to make Robert Moreno’s squad next year. 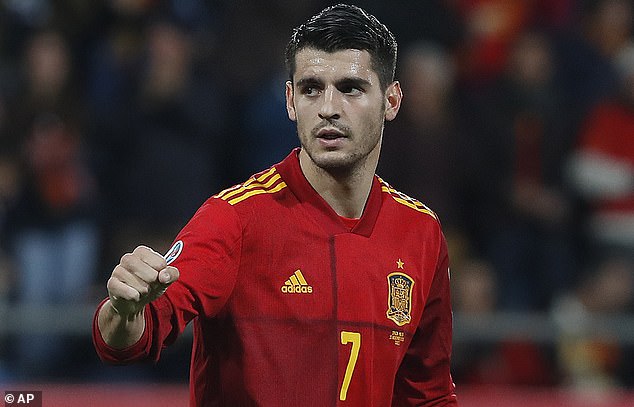 ‘I am confident on the pitch and I know I will have to give everything during the season in order to be at the European Championship,’ Morata said at a press conference on Sunday.

‘There won’t be space for everybody. I want to keep going, doing everything I can for Atletico and Spain.

‘If I play well at the club the Euros will be closer at the end of the season for sure.’

Morata has a prolific strike rate for his country with 17 goals in 32 caps, and will be fighting for a place with fellow forwards Paco Alcacer, Mikel Oyarzabal and Rodrigo, among others.

Spain have cruised to qualification for next summer’s tournament, and have an unassailable lead at the top of Group F.

Moreno’s squad will hoping to recreate the performance of the 2008 and 2012 squad which won the Euros – they were knocked out by Italy in the round-of-16 three years ago.

Read More:Alvaro Morata knows he has a fight on his hands to make Spain squad for Euro