Cristiano Ronaldo is in a league of his own when it comes to his phenomenal international scoring record… he is two goals away from reaching a century, leaving the likes of Pele and rival Lionel Messi trailing in his wake

Yet another masterclass from Cristiano Ronaldo on Thursday evening has moved him ever closer to the milestone of 100 international goals.

The 34-year-old grabbed the 55th hat-trick of his career as he helped Portugal ease to a 6-0 victory over Lithuania, putting him just two away from the century.

His haul of 98 is the best of any player still pulling on the shirt for their national side, and while he cannot quite lay claim to the best tally for any international player ever – that record still belonging to Iran’s Ali Daei – he is in a league of his own when it comes to comparisons against the other big nations. 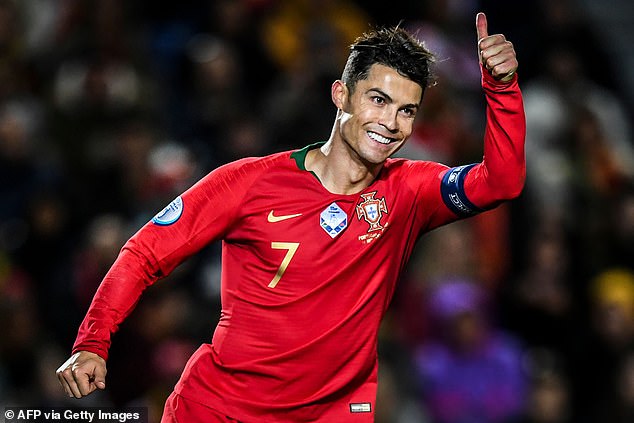 TOP SCORERS FOR THE ‘BIG NATIONS’

It has taken Ronaldo 163 matches to reach his current mark, and you wouldn’t bet against the Juventus striker adding to it, with his side now just one win away from a spot at Euro 2020 next summer.

It is a staggering record, one which makes the feats of Lionel Messi in an Argentina shirt look rather ordinary, and even makes the World Cup’s leading scorer of all-time Miroslav Klose look pretty average.

Ronaldo has 21 more international goals than Pele – largely regarded as the greatest player in history.

The Brazilian, who lifted the World Cup on three separate occasions, managed 77 goals throughout his 14 years with the Selecao, however, that record looks even more impressive than the Portuguese’s when you consider he reached the total in just 92 games.

Klose managed his 71 goals for Germany over 137 appearances, but it was his ability to excel on the biggest stage of them all that made him stand out as an international.

No player has scored more than his 16 goals in World Cup finals competitions, far outstripping Ronaldo’s seven in the same tournament. Both have played the same number of…

Read More:Cristiano Ronaldo is in a league of his own when it comes to his international