Six countries have already qualified for Euro 2020 after the conclusion of fixtures in this month’s international break.

After Belgium, Italy, Russia, Poland and Ukraine had already booked their places in the latest edition of the European Championship, 2008 and 2012 winners Spain also achieved the feat on Tuesday night.

Spain, who also won the competition in 1964, needed just a draw in Sweden to seal their place in the 24-team pan-European contest.

Spain were held by a last-gasp Norway equaliser in their previous qualifier but reveresed their fortunes in Sweden thanks to Rodrigo’s late leveller.

Following Tuesday night’s action, Sportsmail take a look at what has happened and what could still take place ahead of the final round of qualifying fixtures in November. 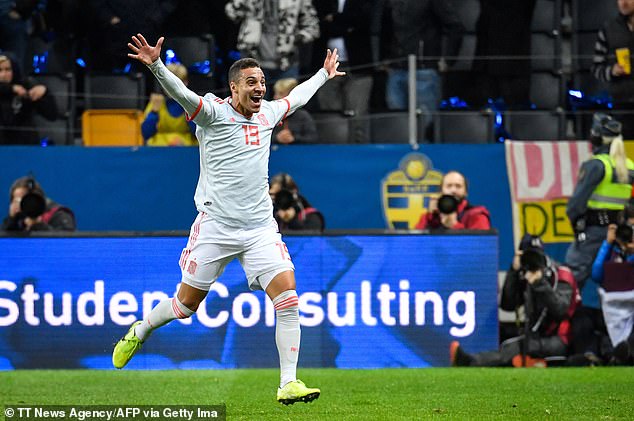 England moved to the brink of qualification with a resounding victory in Bulgaria on Monday night.

The Czech Republic did their cause no harm at all by coming from behind to beat Gareth Southgate and Co on Friday.

They currently sit second ahead of Kosovo. Their meeting in Prague next month looks set to decide who will join England in the second automatic promotion spot.

Southgate’s side know that just a point in Podgorica next month will do, while they have the insurance of going to Kosovo three days later.

Ukraine sealed their position as Group B winners with a surprise win over Portugal on Monday.

It leaves Cristiano Ronaldo and Co in a spot of bother, needing to better Serbia’s results to reach Euro 2020.

The holders have the benefit, though, of kinder fixtures.

Germany and Holland have now taken control of Group C.

Northern Ireland were the surprise leaders going into the international break but were beaten in dramatic circumstances by the Dutch last Thursday, conceding two late goals in stoppage time.

Michael O’Neill’s side welcome Ronald Koeman and Co to Belfast next week before the trip to Germany three days later.

They face an uphill task to avoid the potential lottery of the play-offs.

Holland have the superior head-to-head record, crucial in deciding who tops the group. But if both avoid defeat to the Northern Irish, they will both be through.

Republic of Ireland vs Denmark

Read More:Spain seal Euro 2020 place, but what is state of play in qualifiers?