World Cup 2018: Bank of Russia jokes it predicted Russia’s victory over Spain on

The Bank of Russia has joined in on the World Cup 2018 fever by joking on Twitter that it predicted Russia’s sensational win over Spain in the last-16.

Russia fans couldn’t be more ecstatic at not only progressing to the quarter-finals and defying all expectations before the tournament, but also at knocking out the former World Cup and European champions.

The host nation’s team were incredibly dogged and organised against opposition that tried to pass them to death.

Spain made over 1,000 successful passes during the game while Russia only made 202. But it didn’t matter. After 120 minutes it was still stalemate and the match had to go to penalties. 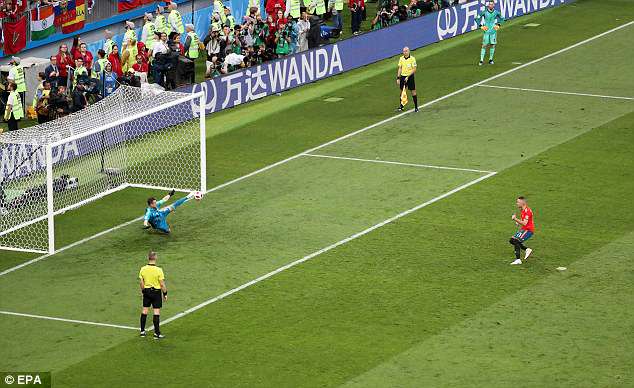 Iniesta, Smolov, Pique and Ignashevich all scored before Koke made Spain’s first mistake, which Arsenal and Juventus target Golovin punished them for immediately after.

And Russia punished Spain again when the host nation’s goalkeeper Igor Akinfeev saved Iago Aspas’s penalty with a trailing foot to send Russia through to the last-eight.

It seems no one saw the Russians progressing so far, or in such impressive fashion, before the tournament.

No one that is, except the Bank of Russia.

Before the World Cup, the Bank printed commemorative 100 ruble notes to celebrate the fact that Russia was hosting the biggest tournament in the world and the bank jokes that it predicted the manner in which Russia beat Spain on it.

However, it’s not Yashin that is the prediction but what’s to the left of him.

A holographic image just above the USSR goalkeeper’s feet shows a footballer hitting the ball with his left foot, which bears an uncanny resemblance to the way Akinfeev saved Aspas’s penalty.

This similarity has led to the Bank of Russia to take to Twitter and say: ‘Prediction has always been our strong point’.

While many have pointed out that the hologram is probably meant to be an outfield player attempting to score rather than a goalkeeper trying to make a save, especially as Yashin is already on the note, a few fans are happy to humour the bank.

Turkey 2-0 France: World champions fail to register a single shot on target in