By Joe Callaghan For The Mail On Sunday

Stanislav Cherchesov already has one stunning upset over Fernando Hierro on his CV. Now the Russian manager wants to do it all over again and become a ‘god’ in the process.

The host nation have surprised many with their success on home soil, having come into the tournament as its lowest-ranked team. Cherchesov however is a man who knows plenty about upsetting the odds.

He was in goal for Spartak Moscow in 1991 when they stunned Real Madrid in the European Cup, storming the Santiago Bernabeu for a 3-1 victory and knocking the giants out. 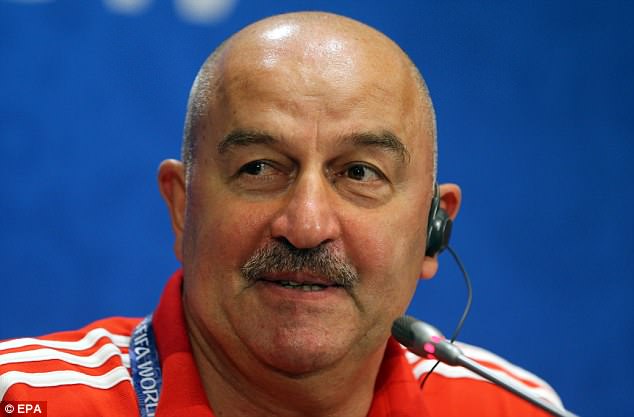 Hierro was at the heart of the Madrid defence that day and as they reconvene 27 years on at the Luzhniki Stadium on Sunday, Cherchesov is taking inspiration from the feat.

‘At that time, Spanish teams were favourites but, to use a Russian expression, “anyone can be God if he tries to”,’ he said. ‘Fernando Hierro was a good player and now he’s a good coach. We won against the Spanish team and hopefully on Sunday we can repeat that success and prove our worth.’

After inspiring his side to back-to-back victories over Saudi Arabia and Egypt, Cherchesov has quickly become something of a national hero. As he began his press conference on Saturday, he was presented with a porcelain figurine waving a Russian flag. The piece had apparently been dubbed ‘Success’. 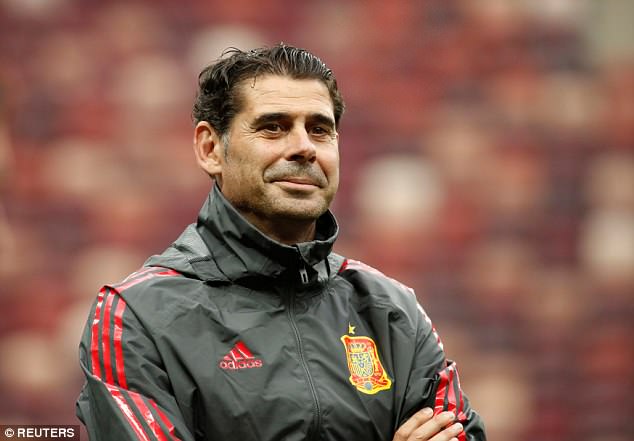 Hierro’s Real Madrid lost to Spartak Moscow, for whom Cherchesov was in goal, in 1991

‘We have been thinking of how to play for the past four or five days, and then you give me this present and everything is so easy. Because it’s called “Success”,’ Cherchesov joked.

But he knows it won’t be easy. Even with Spain still looking for their best form after the emergency appointment of Hierro on the eve of the tournament, the 2010 champions would appear to vastly outmatch the hosts. Having already performed above all expectations, Cherchesov hopes the stakes will weigh heavier on the favourites.

Read More:Russia coach Cherchesov hoping for another victory over Hierro