By Baz Bamigboye for the Daily Mail

Actor Toheeb Jimoh has spent the entire quarantine ‘doing absolutely nothing’ but eating his mother’s home-cooked Nigerian cuisine and playing FIFA with his virtual team-mates for hours on end. Alas, the Division One title for his group’s Supermalt FC (yes, after the drink) has so far eluded them.

Before lockdown, though, the 23-year-old had been anything but idle. He’d already filmed Anthony, Jimmy McGovern’s searing drama that explored the life that Anthony Walker might have enjoyed, had it not been cut short at the age of 18, 15 years ago, when he was murdered by two white men.

The drama was screened on BBC1 in primetime last Monday and is available through ITV Studios on video and digital download from next Monday. 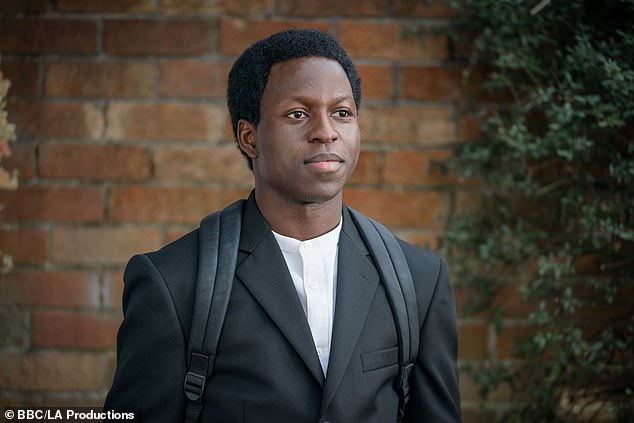 Toheeb Jimoh starred as Anthony in Jimmy McGovern’s BBC drama that explored the life Anthony Walker might have enjoyed, had it not been cut short at the age of 18, when he was murdered by two white men

Jimoh’s portrayal of earnest Anthony is outstanding. Walker’s mother Gee is portrayed by Rakie Ayola and she’s unbelievably good, too.

Jimoh said that while it’s vital to tell stories like Anthony’s, he doesn’t want to ‘fall into the trap of only telling black trauma stories’. He said there’s too much eagerness to tell stories where black people are struggling instead of weaving diversity into the seam of a movie.

He wondered why network executives and producers aren’t ready ‘to accept stories where it’s just about a black girl or boy who goes off to be a lawyer’.

In Apple TV+ series Ted Lasso, which stars Jason Sudeikis as an American football coach hired to manage a fictional Premier League soccer club, his character is ‘just a Nigerian boy who is a professional football player’. 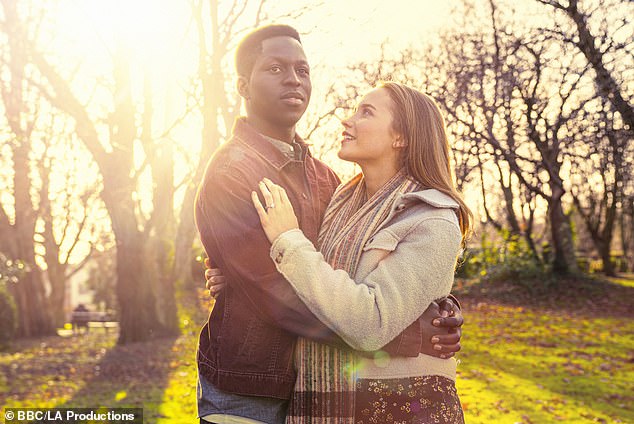 Jimoh (pictured with Julia Brown as Katherine) said that while it’s vital to tell stories like Anthony’s, he doesn’t want to ‘fall into the trap of only telling black trauma stories’

Jimoh rates himself as an OK player (FIFA apart), though not up to a professional standard. Apple hired a football stunt double but the chap’s services weren’t required. Jimoh was only told about his stand-in two days before filming ended.

‘I was doing all the dive moves, the goal-scoring and football stuff,’ he marvelled, ‘and all the while there was someone much better who could have done that.’

The ten-part Ted Lasso will be streamed on Apple TV+ from August 14. It’s a fun show which, in addition to Sudeikis, also stars Hannah Waddingham, Brett Goldstein, and Phil Dunster.

Jimoh also has a main part in Amazon’s series The Power, directed by Reed Morano and based on Naomi Alderman’s novel about women who can release bolts of electricity from their fingers, changing the world…