The World Cup 2018 tournament is in full flow and continues to be celebrated by the Google Doodles.

The Google Doodle for Tuesday, June 19 celebrates the teams from Groups A and H playing today, including Russia, Egypt, Colombia, Japan, Poland and Senegal.

Since then, unpredictability has been the name of the game, with giants such as Argentina and Brazil struggling against the lower-ranked teams, and the Goliath that is Germany coming up short against Mexico’s David.

Even winning teams such as France and now England have found it tough to put too many past the Socceroos and Tunisia.

The tournament runs for just over a month, with 32 teams playing a total of 64 matches across 12 venues in 11 cities around Russia including Moscow, Sochi, Nizhny Volgograd and Yekaterinburg.

The World Cup 2018 Final will take place on July 15 in Moscow’s Luzhniki Stadium.

Today’s Google Doodle has invited guest artists from each of the countries playing today to pay tribute to their home nation and describe what football signifies in their country. 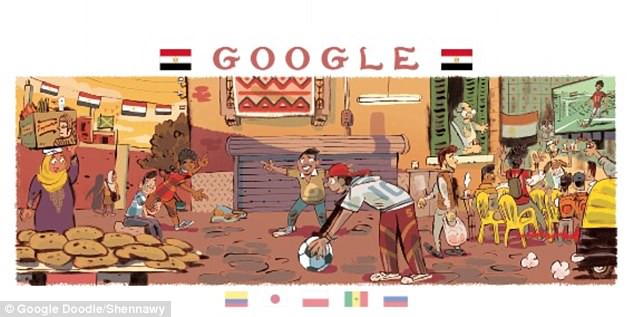 The Egyptian Google Doodle was created by Shennawy. Egypt play Russia in the Group A clash

This World Cup Google Doodle series aims to explore and honour the rich and diverse cultures of all 32 countries taking part in the FIFA tournament, with guest artists from every country drawing what football looks like in their country, and what it means to the people.

Russia’s Arina Shabanova said football was always the most popular sport, with every kid playing it.

The Google Doodle for Senegal was illustrated by Pamplemus. Senegal plays Poland today

‘This is not just a game, but also a spectacle that gathers people together, like gatherings with songs by the fire, but only much larger.’

Meanwhile, Egypt’s Shennawy said football is ‘soul of the people of Egypt’.

‘The World Cup is a time where we all come together and differences are left at the door. Futból helps us forget for a while the hardships that this country has endured and it helps us look forward to a more bright future.’

In Japan, according to Shinji Tsuchimochi, football is a ‘familiar sport’ that is frequently the subject of comics and animation.

‘Children playing football have their own dream of becoming a hero one day by touching such things.’ 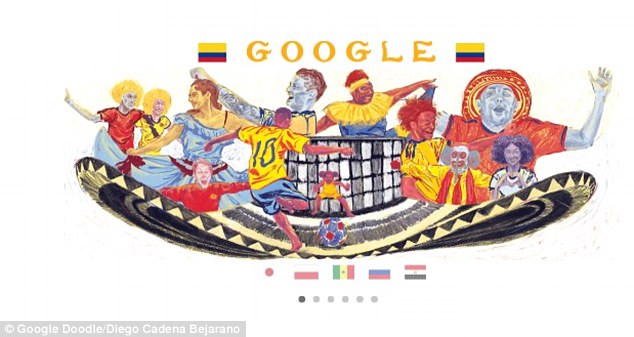 In Poland, Swiętosław ‘Slawek’ Fedorczuk says football is less a sport and more ‘like a celebration’, connecting old and young people alike, even ones who don’t follow the…