The World Cup kicked off in truly lavish fashion as host nation Russia put on a star-studded display at the opening ceremony to officially commence the start of the global showpiece, but it was marred by English pop star Robbie Williams gave the middle finger to the TV cameras.

The tournament kicks off in earnest with Russia taking on Saudi Arabia at the Luzhniki Stadium, with the hosts harbouring the added pressure of impressing in front of their home fans.

Thousands of revellers packed inside the sold-out stadium to witness the dazzling opening ceremony, with all the bells and whistles which have become synonymous with similar events of World Cups’ past. 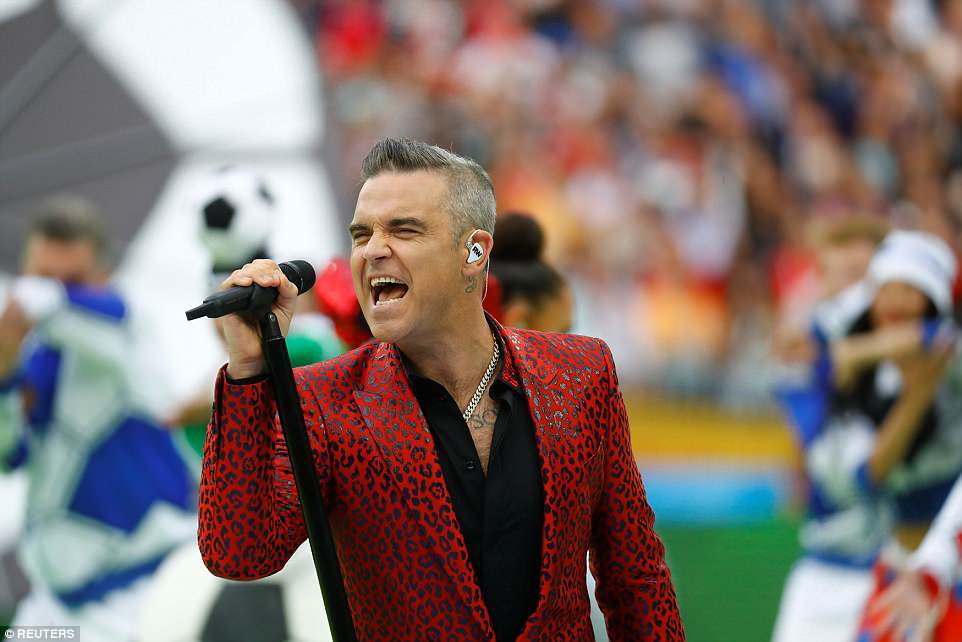 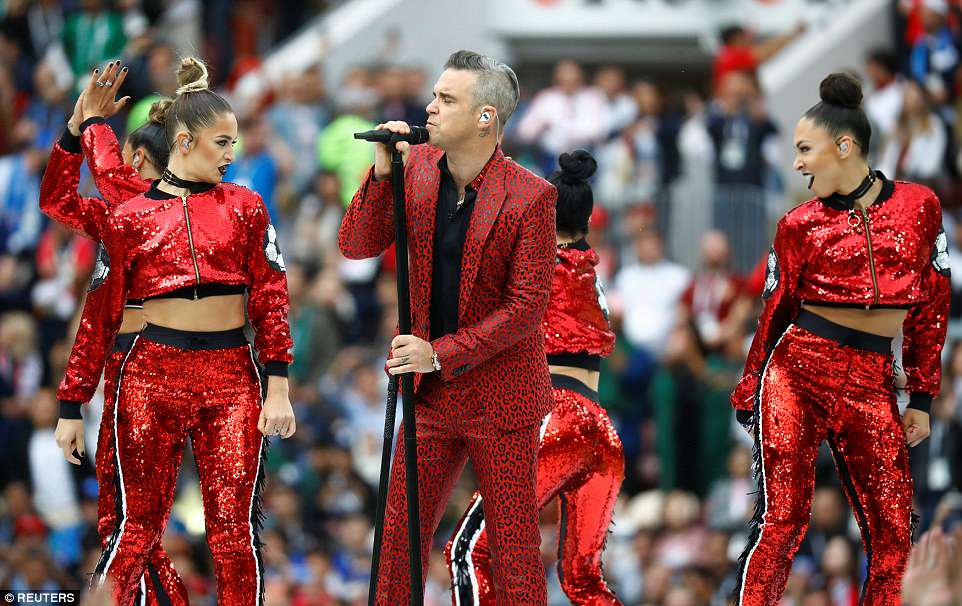 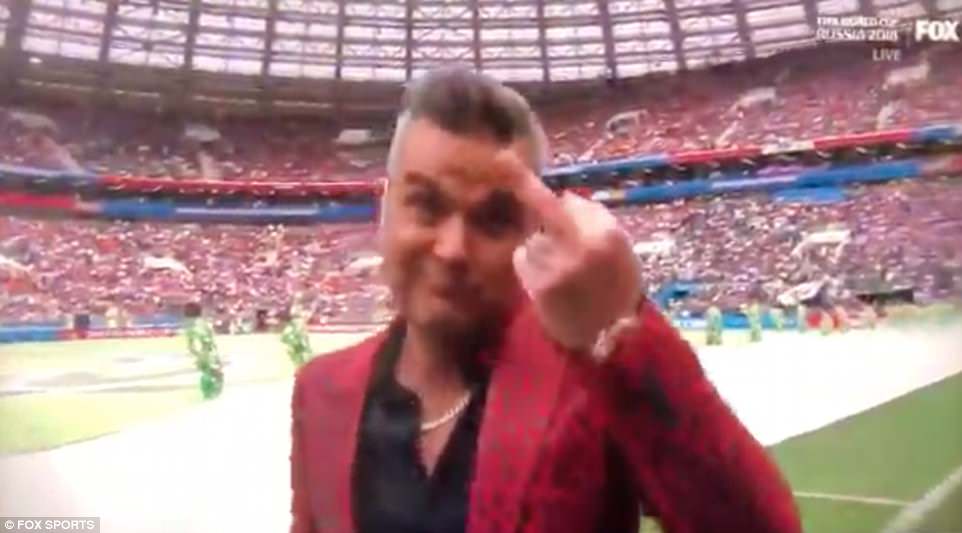 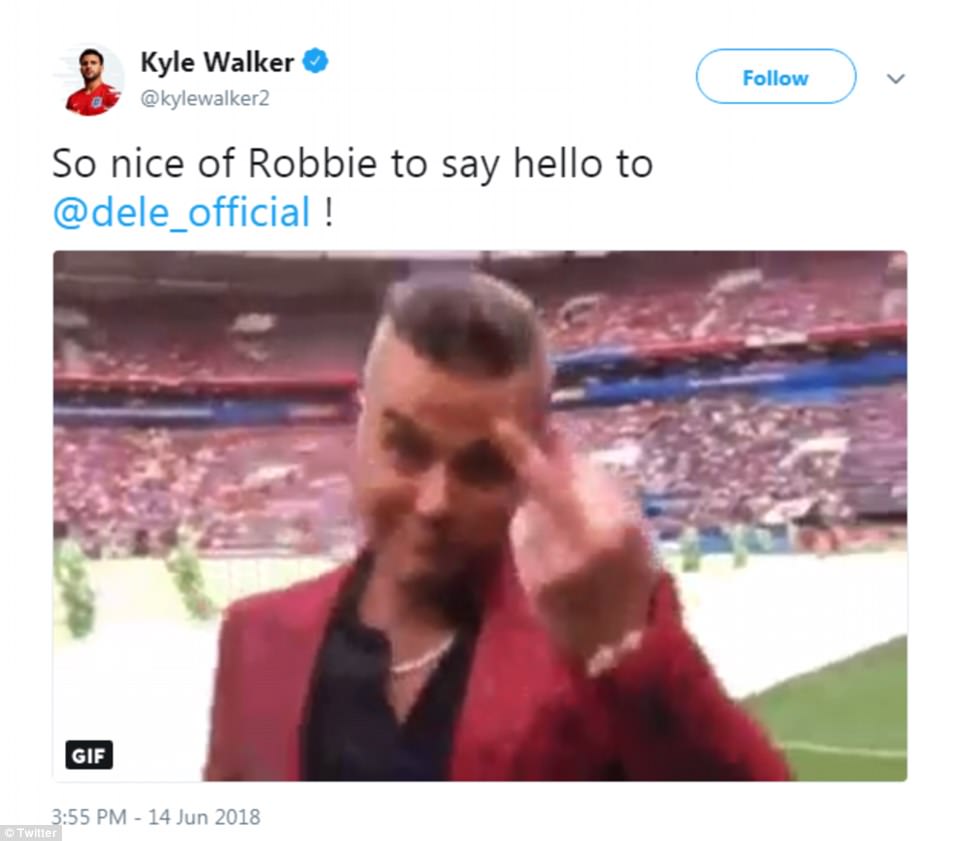 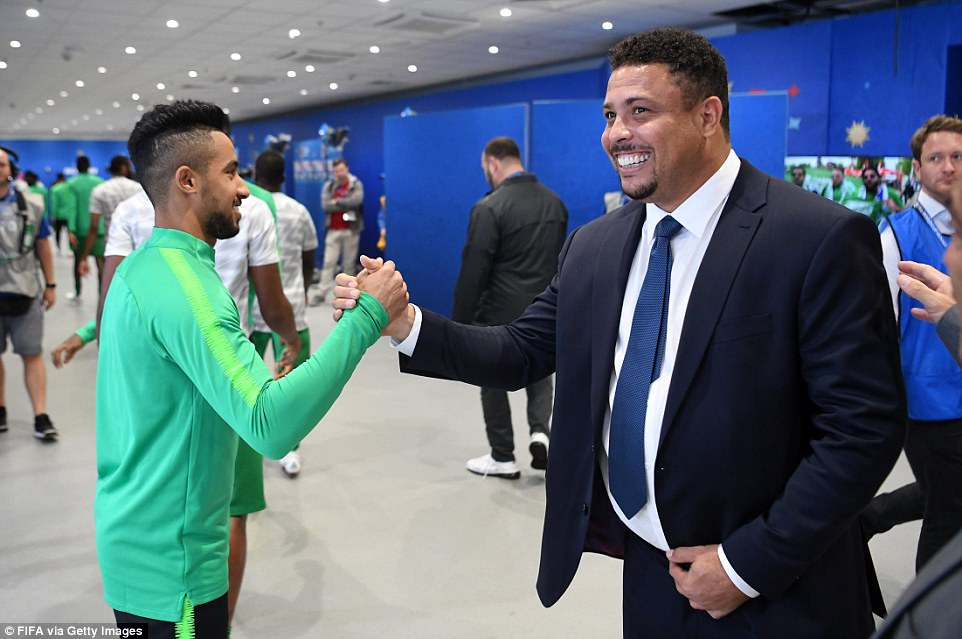 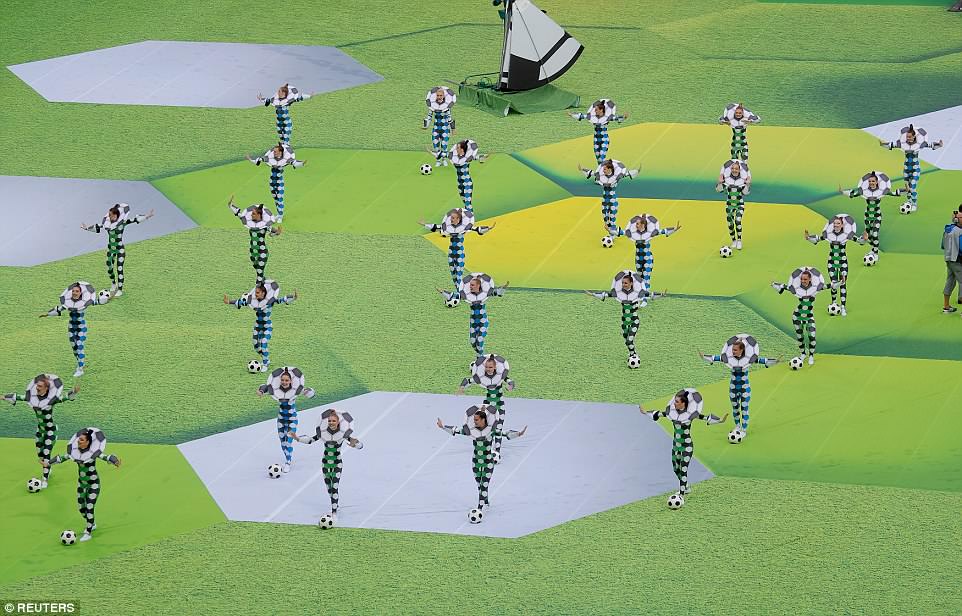 A host of dancers line the field, wearing footballs around their neck, as they dance to Robbie Williams’ songs

Representing the UK at the event was pop sensation Williams, who performed three songs as part of the opening ceremony for the 2018 World Cup – with his controversial single ‘Party Like a Russian’ not included on the set-list.

He did, however, fail to steer clear of controversy when he took the decision to raise his middle finger to the cameras as he left the pitch, which left an unsavoury taste following his upbeat performance.

England right back Kyle Walker then took to Twitter to comment on Williams’ actions, writing to Dele Alli, with an accompanying gif of the gesture: ‘So nice of Robbie to say hello to @dele_official!’

The decision to book the former Take That member to sing at the opening ceremony met with surprise when it was announced by FIFA on Monday.

The plans for the opening ceremony at the Luzhniki Stadium had been a closely-guarded secret.

Williams – described by FIFA as a ‘global music icon’ – performed at certain points throughout the scheduled 15-minute pre-tournament build-up. 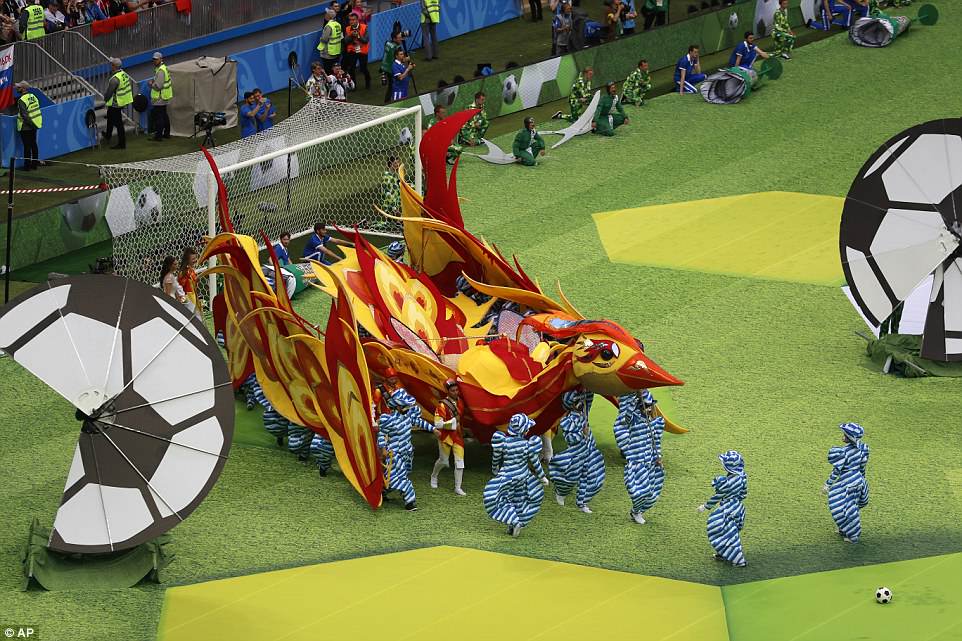 Artists perform before the Group A match between Russia and Saudi Arabia, which opens the 2018 soccer World Cup 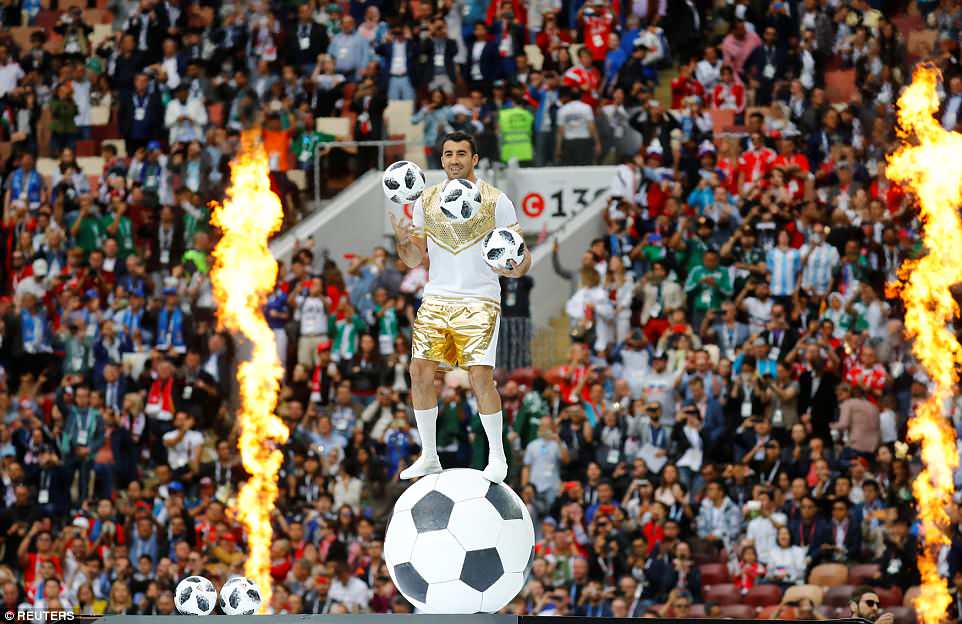 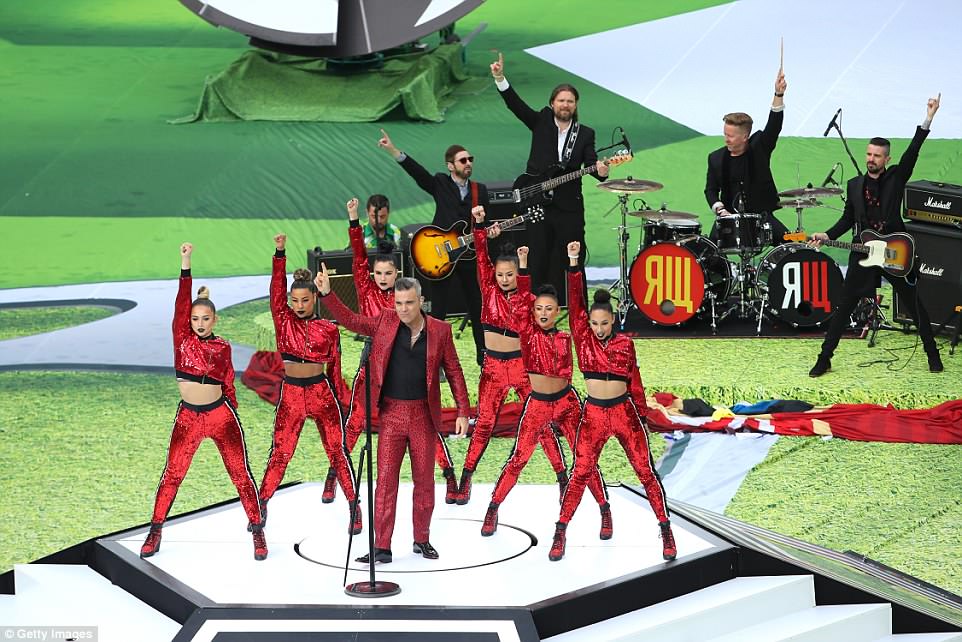 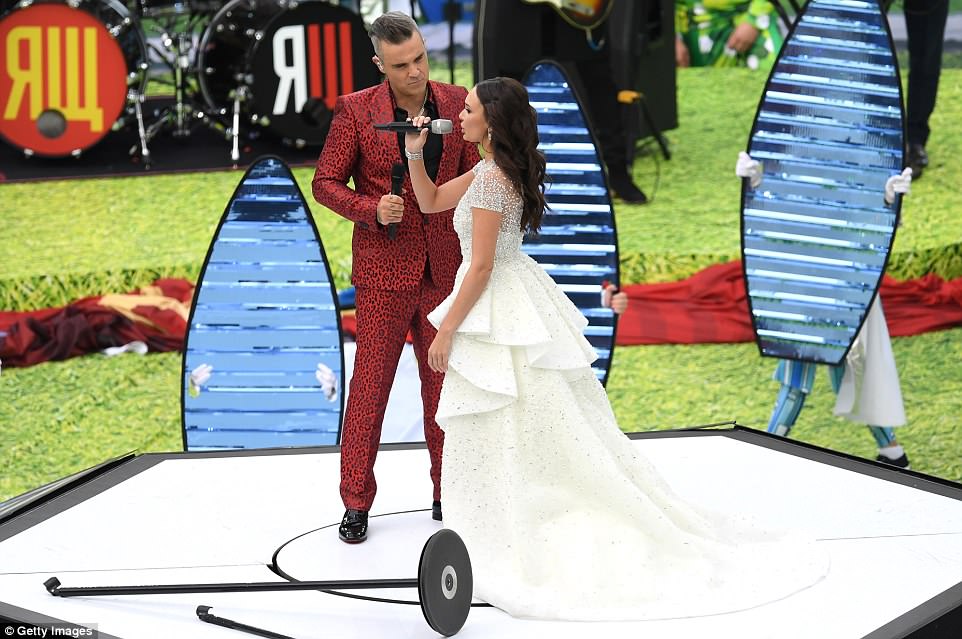 The 44-year-old opened with his 1998 single ‘Let Me Entertain You’ at the start of proceedings after spending time on stage with former Brazil striker Ronaldo.