A pensioner who shouted ‘You’re a black c***’ at England star Raheem Sterling has been banned from going to matches for three years.

Kevin O’Brien, 61, got drunk and shouted racist abuse from the stands at Wembley Stadium during the Carabao cup final between Manchester City and Aston Villa on March 1.

Wearing a pale-blue shirt, black glasses and denim jeans, he asked bench chair Yuksel Mehmet to sentence him today at Willesden Magistrates’ Court – 81 miles from his home in Redditch, Worcestershire.

Pensioner Kevin O’Brien, 61, (left) who shouted ‘You’re a black c***’ at England star Raheem Sterling (right) has been banned from going to matches for three years

James Crawley, from the police’s central football unit, told O’Brien: ‘Given the nature of the incident I have a three-year football ban for you.’

Prosecutor Katie Reiss then told the court: ‘This incident occurred on March 1 at the Carabao cup final between Manchester City and Aston Villa.

‘There is a witness who was sat in seat 125 watching the game and the defendant was sitting directly behind them.

‘The witness heard the defendant shout abuse at the field such as ‘Sterling, you’re a black c***’ in an angry manner.

‘This was said after an incident on the field between him and another player.

‘It’s not believed Raheem Sterling heard the comment. The witness said he was disgusted and angry at the comment.

‘He was arrested and interviewed. He told police: ‘I may have called him a black bugger, but that’s about it.’

‘He also said he was drunk and shouted a lot of things but that it was not directed at a specific person.

‘He said there was a couple in front of him and he did apologise to them. He said he doesn’t remember exactly what was said.’ 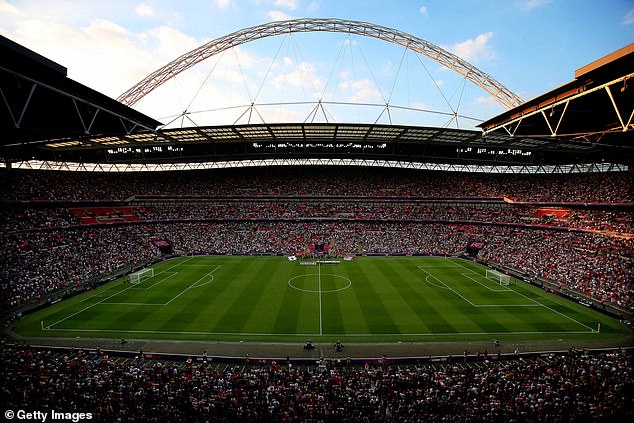 O’Brien, 61, got drunk and shouted racist abuse from the stands at Wembley Stadium (pictured) during the Carabao cup final between Manchester City and Aston Villa on March 1

Qaisar Shah, defending, said: ‘It’s one sentence that he says, a few words really, and the racial element wasn’t the main reason for him making the remark.

‘He’s been going to football matches since he was 15 year old – for 46 years.

‘He’s been a season ticket holder for the last two years. He’s normally the driver but because he wasn’t driving on this occasion. There was some alcohol taken and he doesn’t remember it too well.

‘He’s been trying to understand himself how he behaved in such a manner.

‘He said what he said and he’s written a letter which has been sent to the court.

‘In the third paragraph from the bottom he writes “I’m not looking for an excuse for my behaviour but more an explanation for what would make me […] behave in such a manner, it’s mainly the alcohol mixed with the daily medication I take”.

‘Because he lives in Worcestershire it…