Giorgio Chiellini came out on top in the psychological battle with Jordi Alba during the coin toss for the penalty shootout which saw Italy knock out Spain and reach the Euro 2020 final.

The semi-final was level at 1-1 after extra-time, meaning the clash was taken all the way to a tense round of spot-kicks, and Chiellini pulled out all the stops to gain a cheeky advantage.

With the toss apparently inconclusive, Chiellini was seen laughing around with Alba, who did not look as amused as his opposite number, and the Italy defender even threw in a mocking punch for good measure. 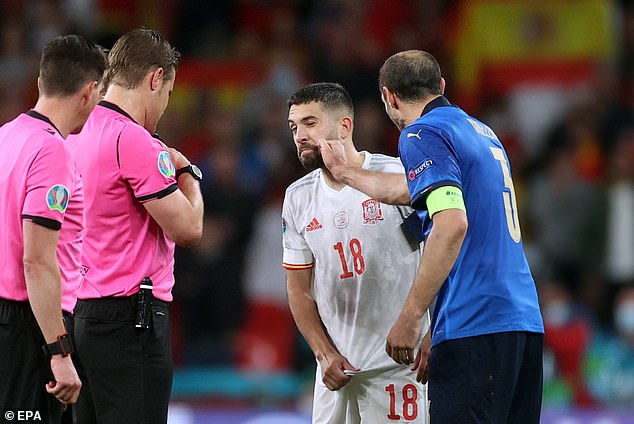 After the coin dropped to the turf, both captains asked to take the first penalty at their preferred end by pointing in opposite directions and vocally pleading their cases to referee Felix Brych.

Chiellini came out victorious in the end, however, and after selecting the stand filled with the most Italy supporters, he then drew Alba into a bearhug and let loose a grin.

In truth, Alba was left bemused by the display from the 36-year-old stalwart – although Chiellini’s reaction revealed his confidence and ultimately left Italy with the narrowest of mental advantages. 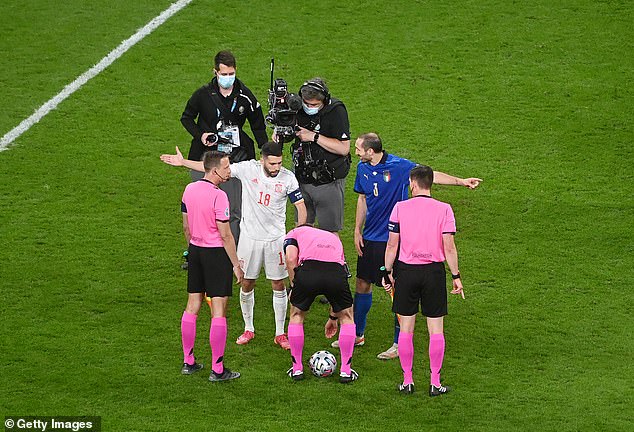 Chiellini put on a bizarre display during the coin toss, with Italy landing their preferred side 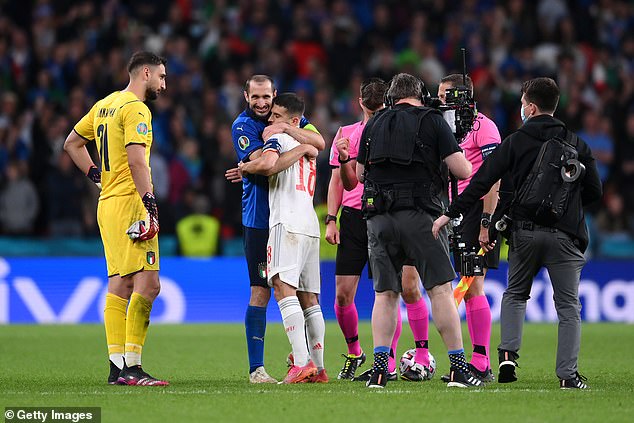 With Alba left bemused, Chiellini pulled his opponent into a bearhug and jokingly punched him

Manuel Locatelli looked to get Italy off to a flying start with the first penalty, only for his effort to be parried out by Unai Simon, before Dani Olmo also failed to convert.

Next, Andrea Belotti, Gerard Moreno, Leonardo Bonucci, Thiago Alcantara and Federico Bernardeschi all found the net, although Gianluigi Donnarumma went on to make the crucial intervention to deny Alvaro Morata.

That left Jorginho with the nerve-ridden task of slotting home the winner, which he duly did so, leaving Simon helpless.

The caressed finish matched Chiellini’s levels of coolness in the coin toss and it sparked wild scenes of jubilation for those wearing blue at Wembley. 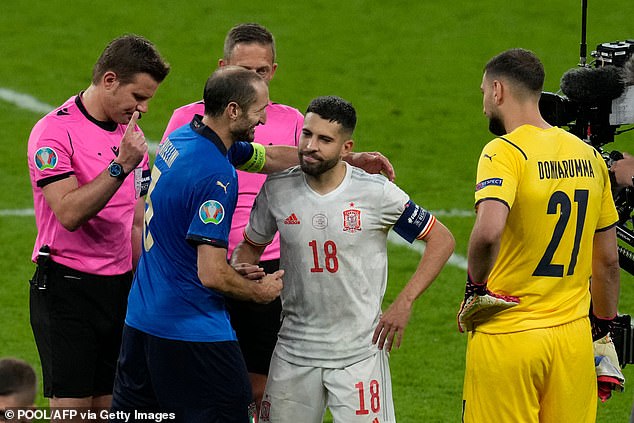 Chiellini’s confidence would spread to Italy’s takers from 12 yards, and Alba was left beaten

But the bizarre moment between Chiellini and Alba, which may have been perceived as poor gamesmanship, was not received well by some people in Spain.

Josep Pedrerol, presenter of TV show El Chiringuito, insisted it was ‘humiliating’ for Alba during his live post-match reaction – with the mind games from Chiellini clearly having had the desired effect.

Jorginho has since opened up on the pressure he felt when sweeping home the decisive spot-kick, and admitted that after a deep breath he simply ‘got on’ with securing Italy’s spot in Sunday’s showpiece.

‘It was a struggle against a great team that made us run so hard, we knew we’d have to suffer, but we believed to the end and in my view deserved to win,’ he said. 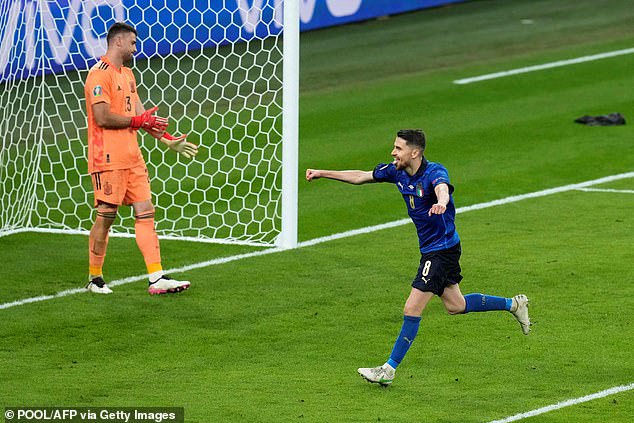